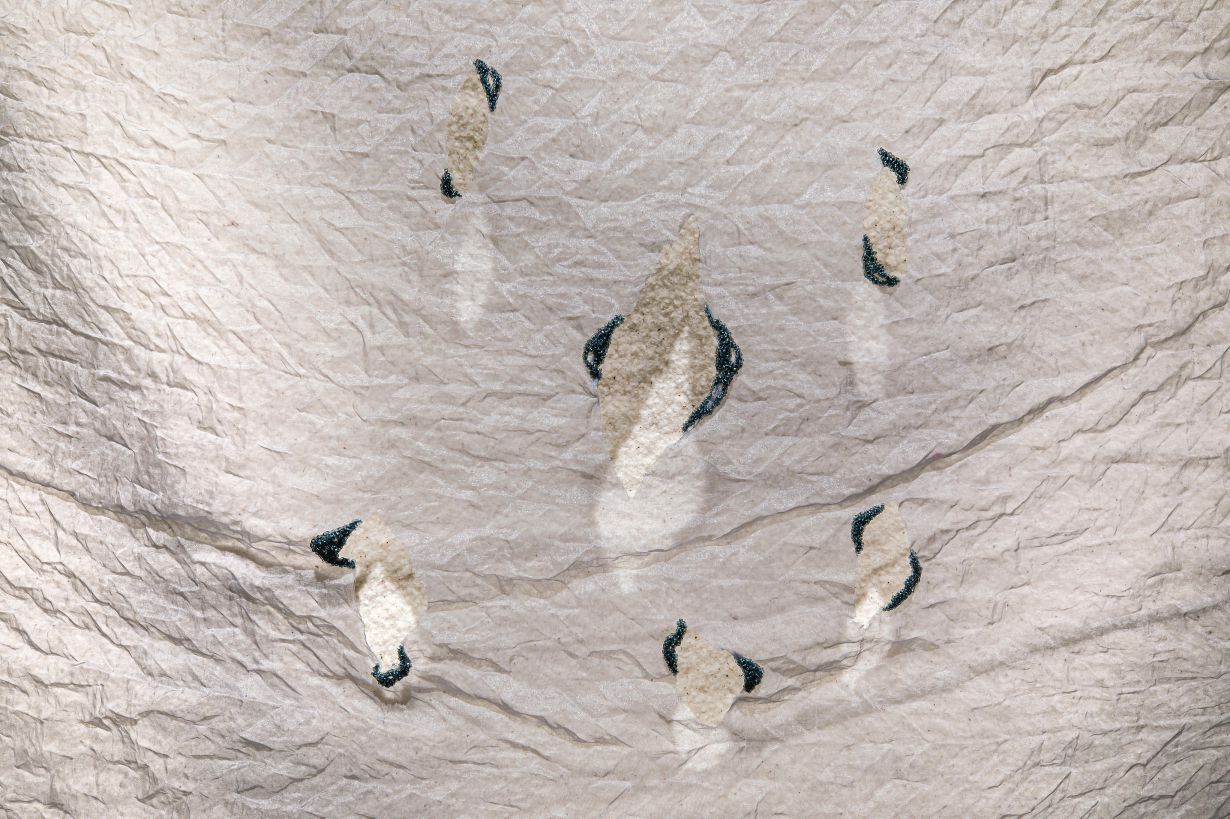 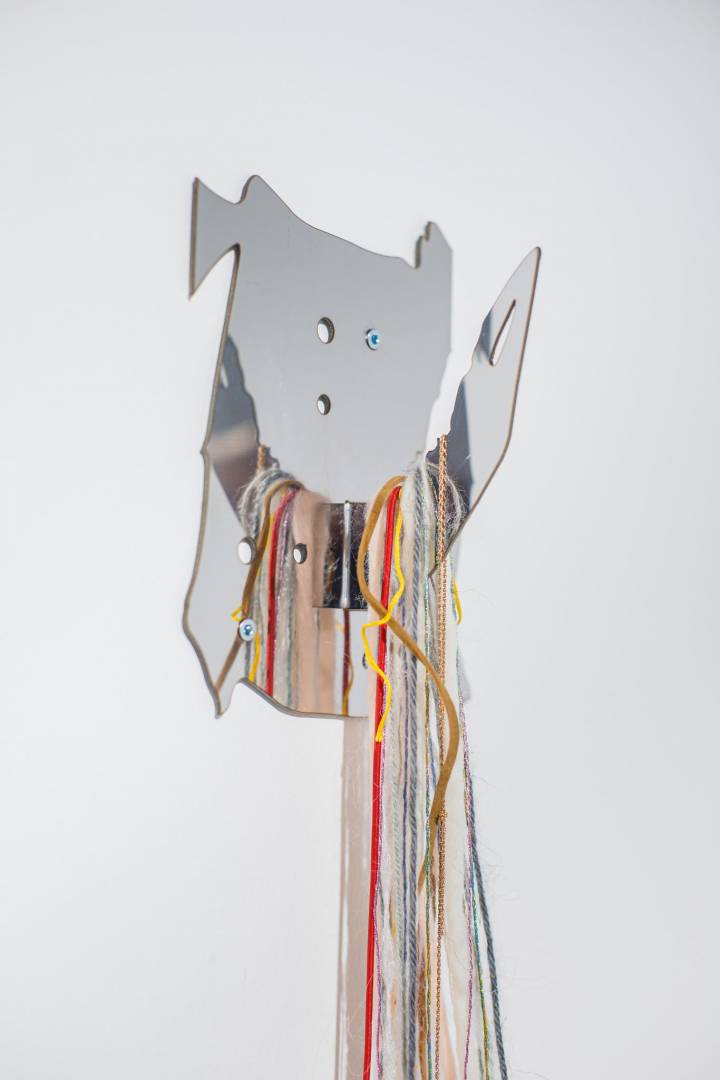 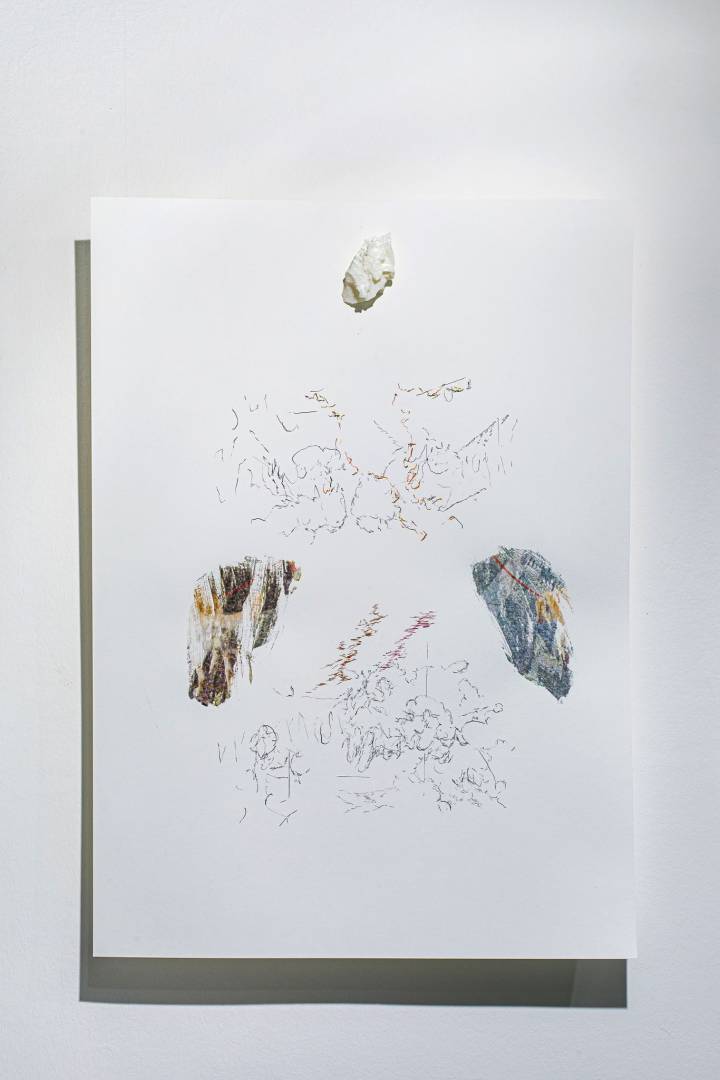 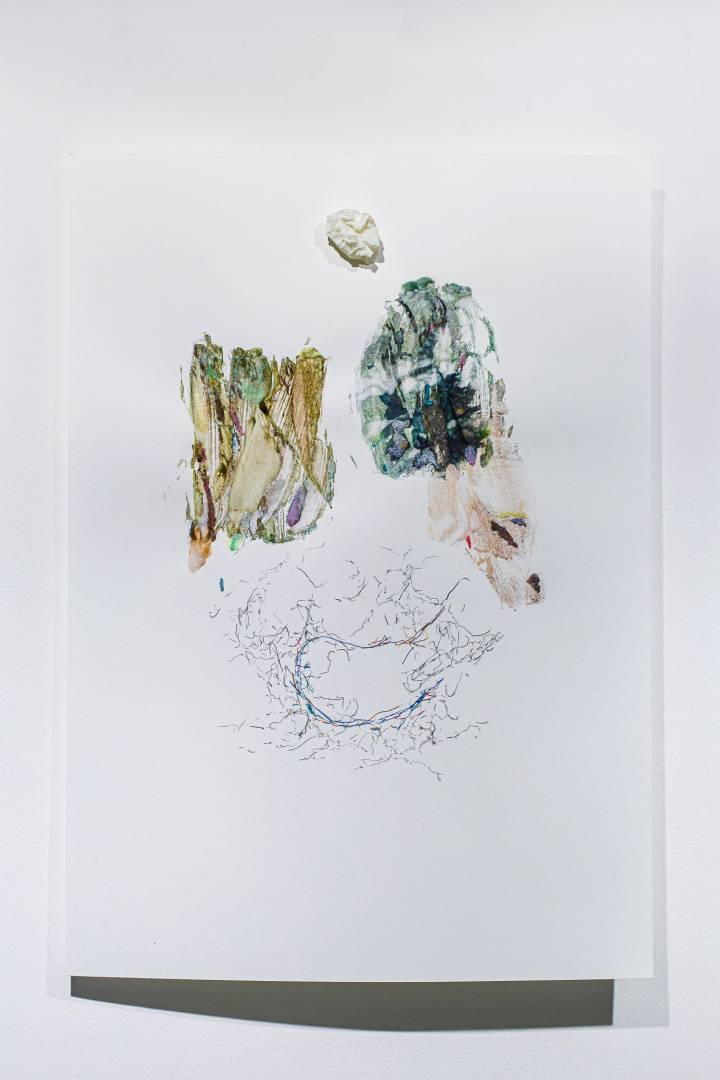 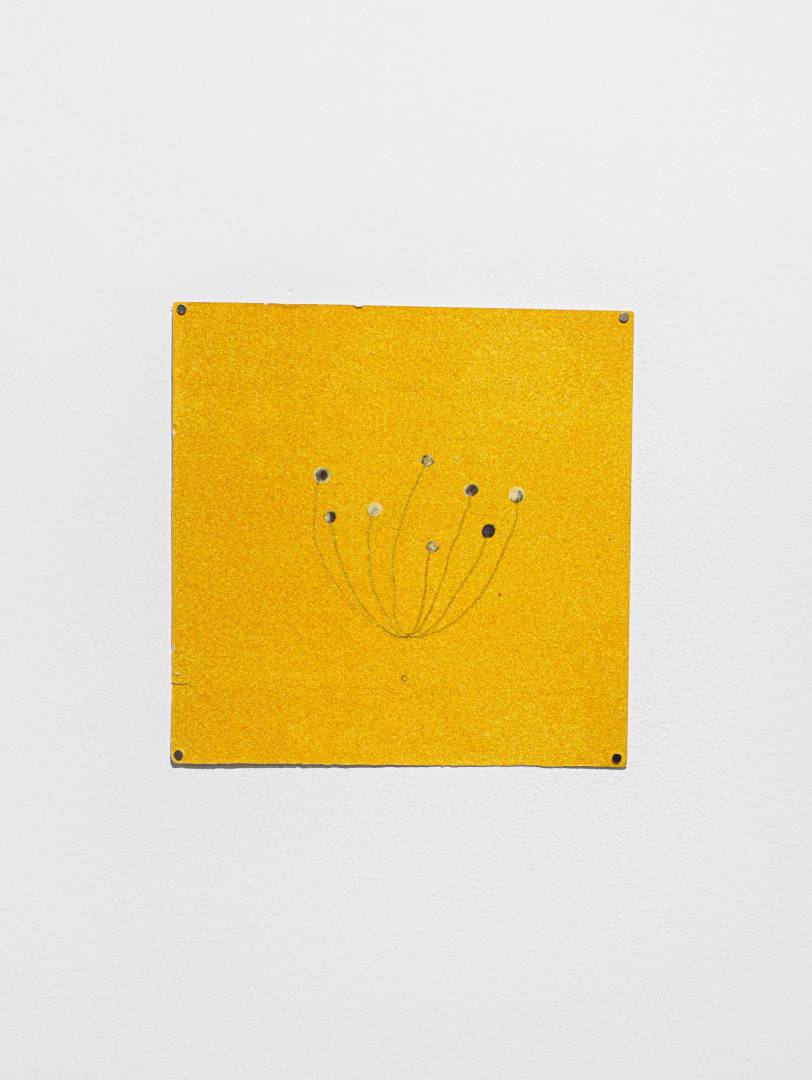 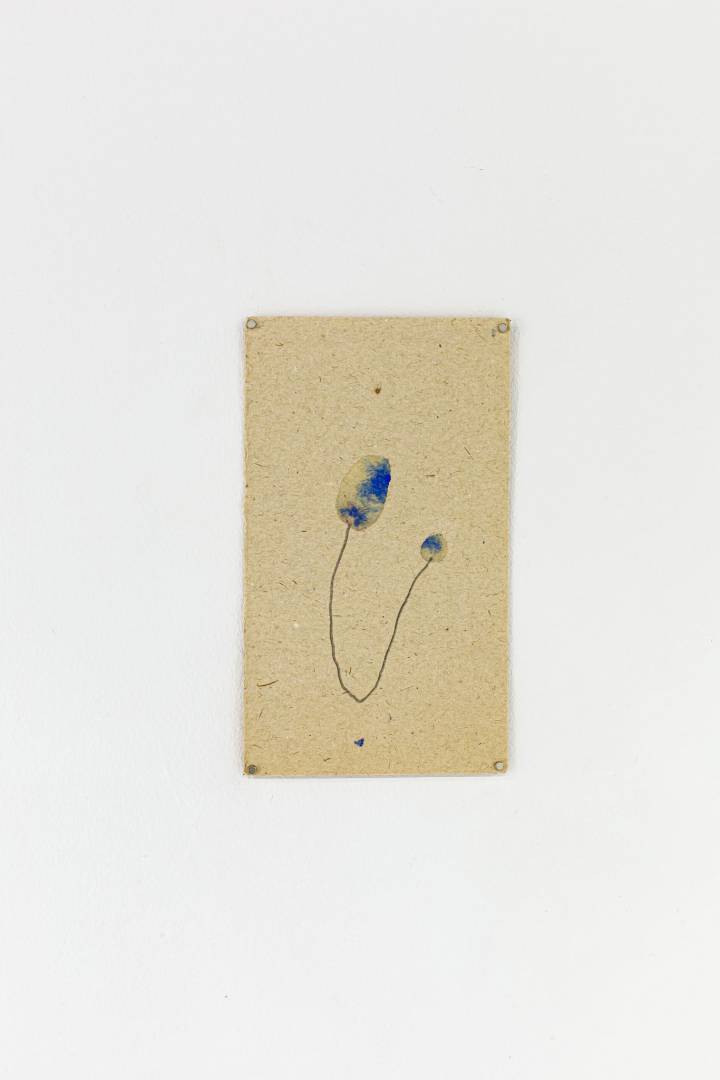 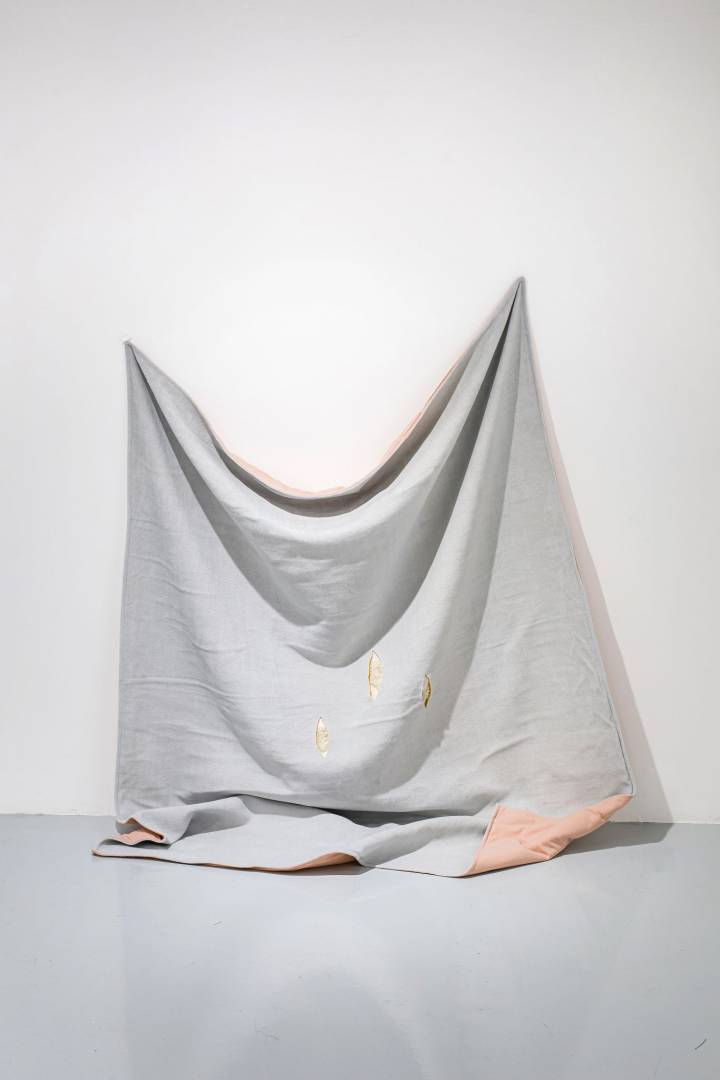 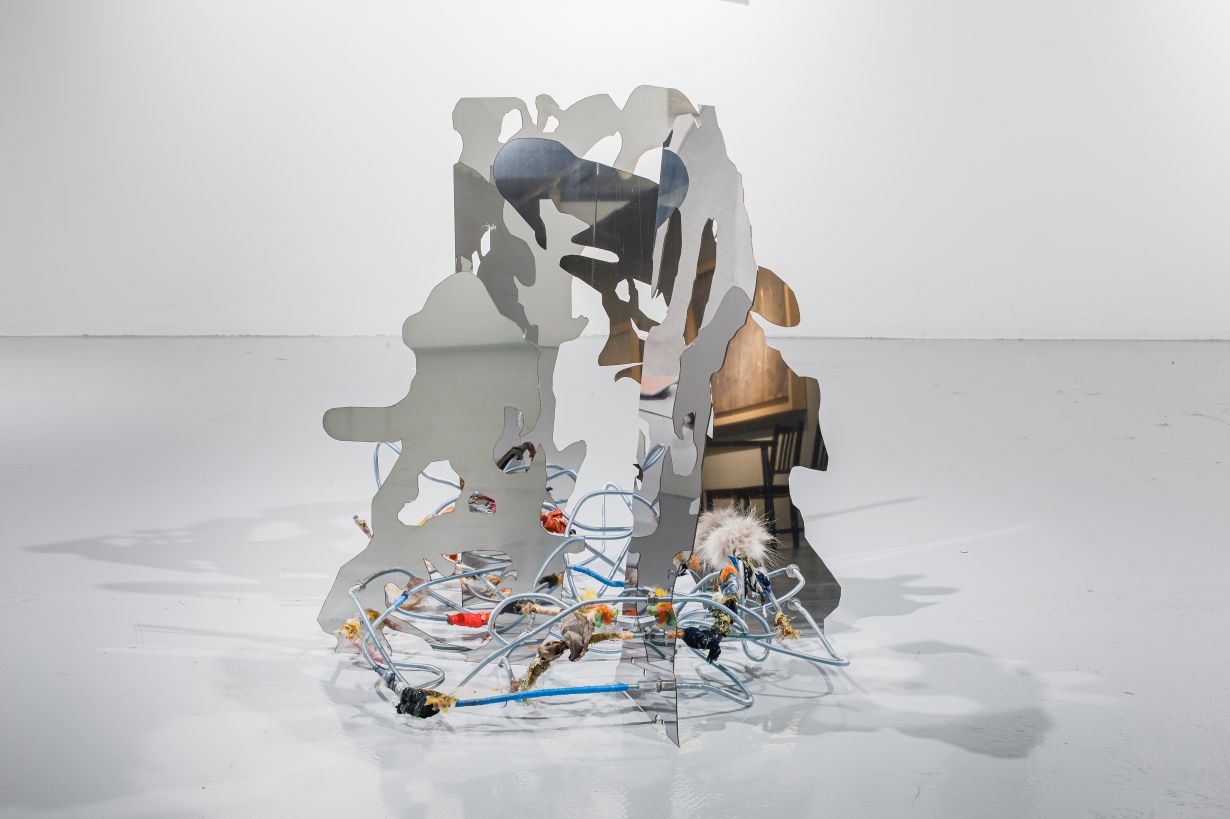 Alisa Gallery presents the Embrace, Almost Envelop exhibition by Andrey Dmitrenko and Kirill Mikhailin. The artists, the former hailing from Vladivostok and the latter from Rostov-on-Don, are completing a two-year course at the Baza Institute and have already participated in group exhibitions, including the Closed Fish Exhibition. Reconstruction project. However, it is at the Alisa Gallery that they first appear in conversation. The exhibition introduces new artworks – works on paper and objects made from fabric, threads, metal, found materials. The works overlap, touching upon various aspects of corporality, vulnerability and safety.

Andrey Dmitrenko examines the properties of fabrics and embroidery. He makes small cuts embroidered with shiny beads and threads across large-scale blank canvases. The parallel between biological tissue and man-made fabric is perhaps one of the most common in fiber art and related practices since both skin and fabric’s function is to cover, protect, embrace and envelop. In a similar fashion, he put together small sculptures using found objects and covered them in enamel, which erases the contours of the inner ‘skeleton’ and creates ‘skin’ around the original elements. These works aspire to unite the scattered parts into a single entity, yet hinting at the futility of this endeavour.

Kirill Mikhailin explores a different facet of enveloping. One of his works is a self-tensioning metal structure covered with adhesive mass that was inspired by bird traps. Once trapped in one of those, a living thing remains immobilized forever. The trap ‘embraces’, yet, unlike fabric that gently envelops the body, this particular kind of embrace and enveloping is extremely perilous. The sticky surface captures the traces of interactions with the object – touch prints, dust, organic matter. The artist is interested in the paradoxical state of the ‘domesticated’, trite, which offers neither safety nor shelter, and the contradiction of these premises gives way to anxiety.

Both the neat framing of the cuts in the body of the fabric and the collection of entropy traces are devoid of anguish and tension. In contrast to the art of the 90s, which constructed the image of the body’s disintegration into components as a result of its weakness, imperfection, and disaster, the position of the artists in this exhibition is rather aloof and impassive. In our day and age, trauma as a personality-shaping event has been elevated to an absolute. However, Dmitrenko's ‘wounds’ on the surface of the fabric are as neutral as possible, not dramatic or richly decorated, whereas Mikhailin's traps and hooks become the tools of a collector not particularly concerned who or what gets caught in their net – they observe the catch with the curiosity of a naturalist (or a child?).

Andrey Dmitrenko (b. 1990, Vladivostok) is a Moscow-based visual artist working with mixed media, comparing textures and characteristics of various materials. He creates fabrics, embroidery, works on paper and related media, as well as installations and video art.  Participated in the Special Project of the VII Moscow International Biennale for Young Art. Dmitrenko’s works are featured  in the collections of the Moscow Museum of Modern Art and the Zarya Center for Contemporary Art.

Kirill Mikhailin (b. 1992, Rostov-on-Don) is a Moscow-based interdisciplinary artist whose practices include installations, objects, works on paper and painting. Participated in the Special Project of the VII Moscow International Biennale for Young Art.